Just one full week in my new job, that’s what it took me to experience a new kind of sport, the “Meeting Run”.
And as a good friend of mine would say, like everything there are always two sides.
In what I experienced I encountered a good one and a bad one (and no there’s no ugly one, at least not yet).

The good side was that my Google Fit application started congratulating me everyday for meeting my 1 hour walking goal, and sometimes I would even hit that by noon!

In 15 years in software development, it never happened to me during work days ! (yes I know you might argue that smartphones and activity tracking applications are rather recent, so you’ll have to take my word for that).
This is great news, I finally managed to exercise and work at the same time, there’s a hope for me to loose the kilos I gained this summer!

And as you might suspect there’s no free lunch so where’s the catch?
Well here’s the bad side ; since all meetings were adjacent, it was just impossible for me to arrive at time to any meeting.
And it really annoyed me, I always used to do my best to be at most on time if not a couple of minutes before.
But I admit when I was able to do this my calendar looked a little bit different than it is now.
The same pattern occurred the whole week, and I started getting calls from people waiting for me in the next meeting.

That’s it, this is the end, I said to myself sadly ; bye bye punctuality and welcome reality …
Fortunately a little voice in my head was whispering “no, no, no” and when I paid attention I heard it say “… broken window theory … normalization of deviance …”.
And it just hit me, it was clear to me that I was slipping into these anti-patterns.

Accepting being late to meeting is a clear illustration of “Diane Vaughan’s normalization of deviance”.

And worse, it’s the first broken window I’m inviting to my work habits. What next, I’ll start accepting code with less quality, shipping untested code to production, and end up considering compiler warnings as just normal messages!
NO, NO, NO, this is not an option.
But how to avoid that? How to avoid adjacent meetings? One might be tempted by defining a process to manage his calendar.
And start thinking about rules, like meetings should not be adjacent, or they should never be scheduled to start at hh:00 but rather hh:05.
But how to enforce that, you might think about developing an outlook extension for that …
That was really compelling for the software engineer in me, but for the pragmatic developer it looked complex and too much, it also required everybody to be aligned with the rules when booking meetings.
I needed something that I can achieve on my own, where I have full control to apply it, something that would be simple. 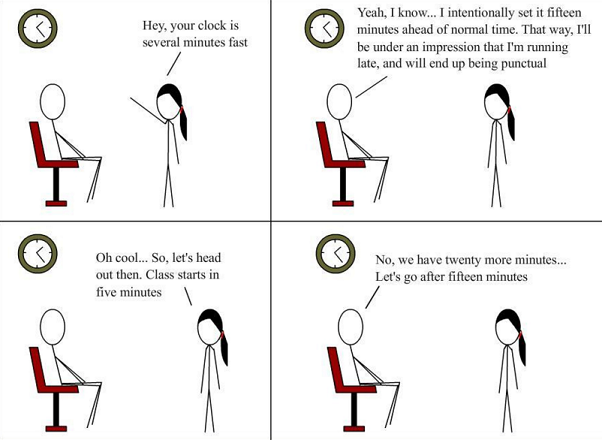 Suddenly it all became clear. The solution is simple, do like the Bitcoin miner. A Bitcoin miner will keep a small fee for himself when validating a transaction.
All I have to do is the same, I’ll just apply a tax to the meeting time and take 5 minutes for me.
This will let me leave the meeting 5 minutes early, of course I’ll inform people at the start that I’ll be leaving early.
And that’s it ! A simple and actionable solution.
Abiding by this rule I will hopefully get back punctuality and avoid annoying people by arriving late to meetings.

So from now on, if you’re in a meeting with me, be advised, there’s a fee, I’ll be leaving 5 minutes early!